So our entrance is boring.  Well right now it's haphazardly put together, but it has the potential to be boring. This was it before we painted and moved in:

At first I thought a shoe rack & some hooks would suffice in this space,

but it was still terribly unorganized & cluttered & really didn't make the area separate from the rest of the living room.  Besides, the weather is was is getting colder again (make up your mind mother nature) so we will need somewhere for gloves, mitts, hats, and other wintery things.

So here is the new plan:

1. Paint and install the 2 bi-fold closet doors.  We did originally want to keep the closet as open storage, but now that we've stepped back into reality and realized we have a lot of junk stuff that has to be hidden, closest doors are the best route.

2. Storage/entry shelf.  I want a little area for storage, a lamp, a dish for keys, somewhere to drop the mail etc. I have a great dark stained wooden shelf my dad made that is about 3 feet tall. I think with some legs it would work perfectly in the space as a way to make the entrance separate from the rest of the living room.

3. Last look mirror and mail sorter/magazine holder.  It never hurts to take one last look before leaving the house, so we want a mirror right by the front door. I also have this ikea magazine rack that I think would be good for sorting in coming/out going mail.

4. Fix the trim.  Luckily the piece of trim missing from the left side of the front door was just hidden in the garage so it will be going up and painted. update: up but still needs to be primed when I figure out where the paint cans are hidden.

Some other little things I'd like to do:
- put down this door mat (after I can figure out a way to get the dog to stop stealing it and trying to rip it apart, I'm thinking of spraying it with bitter apple which is supposed to deter dogs from biting at their fur, but I'll let you know how that turns out. PS it didn't work, she's been on a rampage for the last few days so I'm waiting until she's over this phase to put the new mat down)

- put a coat tree, something like the one above that my parents said they are eventually getting rid of, hint hint, on the right side of the door for everyday jackets, scarves, and hats.  We've been watching a lot of Mad Men so I kind of want a fedora for the coat rack.

- we'd also like some sort of curtain for the window on the door, the glass is frosted right now but there is something unnerving about everyone that knocks on the door being able to see silhouettes of what's going on inside.  I was thinking fabric at first, but now I'm leaning towards a good old paper blind that just sticks to the door.  Its clean and sleek and modern and cheap! 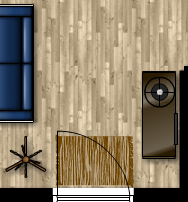 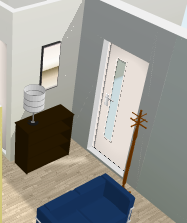