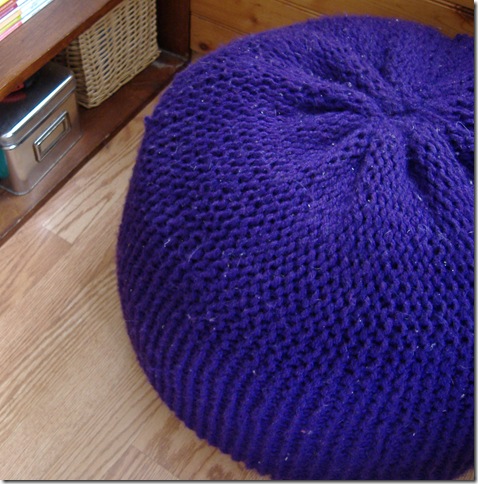 I’m a multi-tasker.  If I’m only doing 1 thing at a time I get antsy.  I’ve been known to watch a couple of shows at once during commercials, while also scouring pinterest, checking out the weather on my phone, reading the weekly flyers, cuddling a cat, and eating a sandwich.  That’s my normal down time.  For a change of pace, I wanted to take up knitting again as a new project to do while watching a movie or arguing debating with my BF, entertaining the dog, you get the idea.

So anyway, I had a giant bag of yarn bought for cheap off of our local Kijiji (like Craigslist), but didn’t know what to make out of 25balls of purple yarn.  I’ve already been using it to create items for my throw (which, by the way, I’ve lost complete interest in for the time being) but this time I wanted to make something big.  I usually crochet small things that won’t cause damage when  thrown across the room in frustration because I can’t get the stupid knot undone.  This time I wanted to make something I’d use and would be noticed.

I checked around for a few inspirations and fell in love with this Puff Daddy Stool on Pickles.
My pouf is loosely based on her tutorial, but I didn’t have the same weight yarn or the same size needles so it was kind of a free for all project.  Mine ended up slightly bigger, hers fits 1 duvet, mine fits 3 and could probably take another for an even firmer pouf.  I got a little knit happy and lost track of how long my piece was getting.  That’s why you should stop once in a while and measure your progress.  Oops.  See how huge it is compared to the cat. 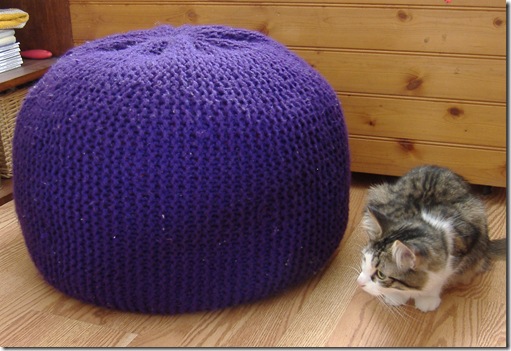 Warning: the tutorial you are about to read might be the worst tutorial ever, BUT it results in a pride worthy pouf, so hang in there!

For my pouf, I found my biggest needles, and cast on as many stitches as I could fit on the needle.  (Check out youtube for some helpful casting on videos.)  I worked with the most basic stitch that everyone’s grandma (or grandpa, aunt, uncle, mom, dad, cousin, baby sister? etc) teaches us, the garter stitch. (Again check out youtube for help.) Then I knit.  Back and forth.  Back and forth.  Click Clack Click Clack until I realized I had a giant rectangle flowing behind me, like almost 5 feet, but I didn’t want to undo anything or I’d have to re-roll the yarn.  You try to undoing and re-rolling a bunch of yarn when you have 2 cats eyeing it from under the couch ready to pounce.  It’s bad enough my legs are pasty white, I don’t need them covered in scratches too.

Once your giant rectangle is finished, cast off and hand sew the 2 short ends together with your yarn.  You now have a tube.  To synch in the top and bottom I took a long piece of yarn and a big fat sewing needle and, starting with a knot in 1 spot at the top of the hole, began weaving back and forth across the giant tube, tugging and pulling until the hole was closed.  (In the Pickles tutorial, she wove into every other stitch around the perimeter of the tube and gradually pulled the circle closed.  I chose not to use that method because I had too much bulk to work with, and the hole never really closed.) Once 1 end is closed, stuff your pouf with what ever you want, scraps of fabric, blankets, old pillows, pretty much anything you have lying around and don’t want to look at.  Well not anything, I wouldn’t use sticks or garbage, garbage would be gross.

So to recap the worst/best tutorial ever:
- find your biggest needles, and a few balls of yarn (I must have used at least 8, again I lost track)
- put a bunch of stitches on the needles (ask youtube for help)
- knit a bunch of rows until you have a giant(or medium, depending on your goal) rectangle
- stop knitting and sew the short ends together, then the top and bottom holes
- wait stuff it with something before sewing it completely closed or you’ll have a flat stool
- put your feet up and relax

Wow this really is the worst, but easiest tutorial ever and such a stylish result!  Anyway, a pouf project like this is super easy and a great beginner project, or refresher project if you’ve gotten away from knitting like I had.   It is also comfy to use as extra seating.

Now when I’m watching a show while writing a blog post and playing tug of war with the dog, I can also put my feet up.  And it’s big enough that when the BF and I are not arguing debating, we can both fit our feet on it.

Are you a crafting multi-tasker too? What projects do you take on simultaneously?