Sewing up a storm

I have a wonderful sewing machine whom I introduced ages ago.  We’re best friends, sometimes, but a few months ago one of the motor belts broke.  It took me forever to figure out what the belt was called and find the replacement (apparently sewing machine repair is  a top secret business).  So after searching and realizing the new belt would cost me anywhere from $15 to $40 not including shipping, I pouted.  Then I got back on the computer and kept looking.  Eventually I found sew-classic.com.  This site has a variety of discount sewing machine parts, but you have to know exactly what you’re looking for.  Knowing nothing about motors or the guts of a sewing machine, this is the journey my sewing machine and I went through. 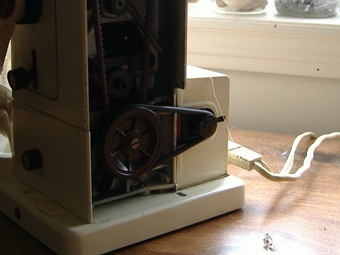 See that round tube-ish looking belt right in front, that’s the one that broke.  The belt snapped off completely,  so luckily I didn’t  have to fiddle with anything to take it out of the machine.  To get a measurement of the belt length, I took a piece of string and starting at one end of the belt, ran the string along the length to the other end.  I laid the string against my measuring tape.  This method also works for belts that are still intact or partially intact, it’s way easier than trying to roll a belt around on the measuring tape believe me.  I took my measurement, 10”, and I found what I thought was the correct belt on the site and ordered it for less than $12 including shipping.

This all sounds easy right, wrong.  When the replacement belt arrived it didn’t look exactly like the old one and my gut feeling told me something was up.  However, I rationalized that my machine is quite old and the broken belt was probably old, so the new belt was probably a better, more technologically advance version that would make my sewing more seamless (see what I did there).  In the middle of all this was our unexpected move due to crazy neighbours which I told you about here.  A few days before the move my new belt arrived.  I tried it out super quick, seemed to work by hand and left it at that until I could set up the sewing machine at the new house.  So finally a few weeks ago I got out my sewing machine, threaded it, got all excited about starting to sew again, and don’t you know it, I had ordered the wrong belt.  It was too loose and kept slipping when I stepped on the peddle.  Needless to say I swore, pouted, yelled at the machine a little, even the cats were scared and left the room.  After a few days of getting over the initial shock, I found my receipt and was ready to return the belt.  Returning it wouldn’t have been a big deal since sew-classic has a 30-day return policy.  But of course I was way over the 30-days.

So I was back at the beginning.  I re-measured my old broken belt, and while looking around on the sew-classic site again, I found that they sell stretchy temporary belts that stretch between 9.75” to 13” which is exactly the range I needed.  For $4.75 plus shipping I sucked it up and ordered another belt.  About a week later it arrived and it looked exactly like the original belt, but I didn’t get excited.  I attached it to my machine, but I didn’t get excited.  I threaded my machine, had a twinge of excitement, quickly squelched it.  Got out some material, lowered the presser foot, stepped on the peddle…nothing.  Thought I might explode with rage, then realized I hadn’t plugged my machine in. Idiot.  Luckily once plugged in everything worked perfectly, so I went to put the machine back together and don’t you know it I lost the cover piece for the motor. No big deal, as long as you don’t put your fingers in the motor while sewing, it works. Yup that’s how I roll around here, haphazardly.

So back to the original reason for this post.  I’ve been sewing these lately: 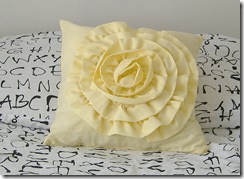 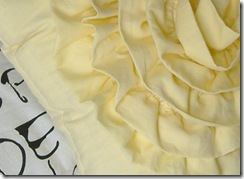 I used this tutorial at Honeysuckle Life for the above ruffle pillow + an old sheet. 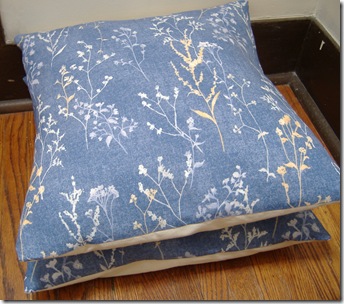 These 2 matching pillows are made from some remnant fabric I found for $2 at our local fabric store and backed with canvas. 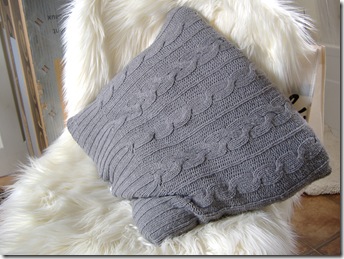 And lastly, this one was made from an old sweater for the chair in my studio.  I think I’m back in love with my sewing machine and look forward to making new things as soon as I can think of something!

Have you done any sewing machine repairs lately? Or repairs on any of your other beloved crafting tools?